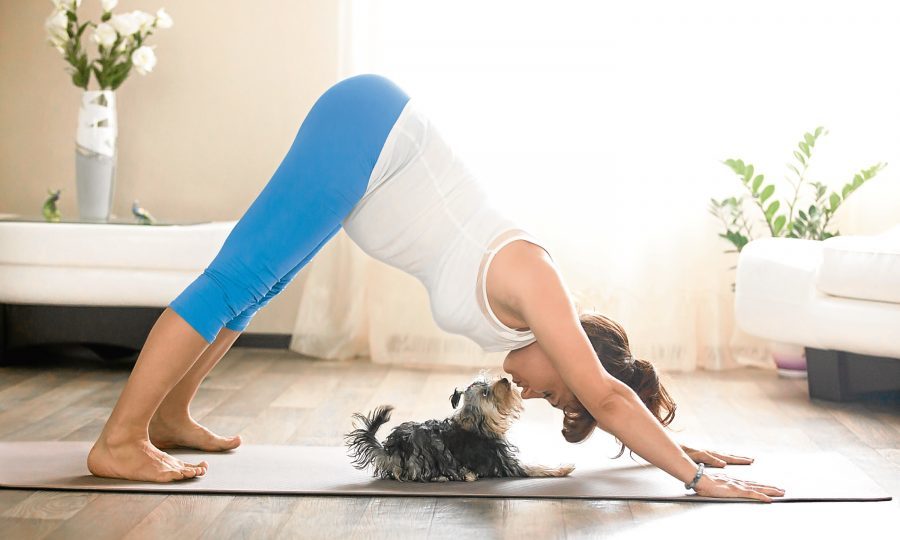 ANYONE who’s ever studied a cat for a couple of minutes knows they are experts at relaxation.

A bit of a stretch, a yawn, and then reclining again to lazily watch the world go by.Dogs, too, are usually quite happy to stretch a bit, roll over, and chill out again.So our furry friends should be naturals for the yoga world — and it turns out they really are.

What started out as a fad — doing yoga alongside your pets, that is — is now tipped to be the next big thing for the year 2017.

Yoga classes in the USA, where humans do the exercises alongside goats, have proved so popular that they now have a huge waiting list.

People and animals often get along great, but we never realised they could also do so while enjoying the ancient physical and mental disciplines of yoga.

A farm in Oregon has seen countless folk of all ages turn up to stretch and do gentle push-ups, while goats mimic them or even clamber onto their backs to enjoy the fun. If the animals love it, the humans seem to get a real kick out of it, too, and doing yoga with animals is said to be even better for a feeling of wellbeing than doing yoga with just humans. It all began when a local child had a birthday party at a farm, and a mother who taught yoga suggested they have a yoga class there, but with one interesting addition. Instead of having the goats stuck in their usual pen out the way, why not let them mingle with the delighted kids? Turns out both children and goats loved it, and the idea has grown ever since.

People who have depression, anxiety, even folk recovering from serious illness, report that a spot of yoga alongside a cute animal has lifted their spirits and set them on the road to happiness again. Funnily enough, many of us learned our first yoga positions with help from animals. One mother online spoke about her memories of her four-year-old daughter doing elephant, giraffe and lion poses, and the Indian yogis who invented classic poses thousands of years ago also mimicked animals, among other things.

The original idea was to form different shapes to mimic the landscape around them, and that included trying to make animal shapes. Any dog owner who enjoys a spot of yoga at home will be aware of how much dogs love yoga mats, with cats not far behind. You can even buy mats for dogs now, as the cheeky canines will often stake their claim, get onto your mat and refuse to let you join them. They will often strike similar poses to their yoga-loving owners, too.

Cats are more likely to enjoy mats simply for sinking their claws into, but that’s just their way of enjoying it.

You may also be interested to know that the boffins reckon there’s a good reason why dogs seem to love those spongy yoga mats. Their paws are the only things they sweat through, and a spot of yoga will leave little sweaty paw marks on their mat. This is another way in which the dogs leave notice that this is their territory, something they treat with great importance.

All I wanted was a decent yoga photo…
@hannah_ta

💜 Some days it fe

DM @vaisnavi_carana for details
♥️ You may ask

It isn't always possible to find balance in our ev

@my_spaceyoga
🕉Ahh eight limbs of yoga
Not many

Happy Hump day 🌞
Let's get on our hands and out

What if "letting go" real

@flowingnomads
Have you been considering a Yoga Te