Lined up one by one behind a glass door, tiny black fuzzy heads peer out at a forbidden Nirvana. They stare at a privilege only the older and wiser among them get to experience.

Just out of reach is a sea of sweet, spongy goodness: fresh, unclawed yoga mats.
Typically, the Good Mews cat shelter in Marietta, an Atlanta suburb, with its bright walls and white volunteer-scrubbed floors, is home to 100 or so cats who lounge and chase and bat at the odd toy, all while they wait for humans to come find them and give them a forever home.

Tonight, however, they are in for something special. Tonight, their home in the cage-free adult cat room transforms into a studio for the ultimate in challenging exercise fads. Classes have popped up on New York’s Lower East Side, in San Francisco, even in Des Moines and in Mobile, Alabama. 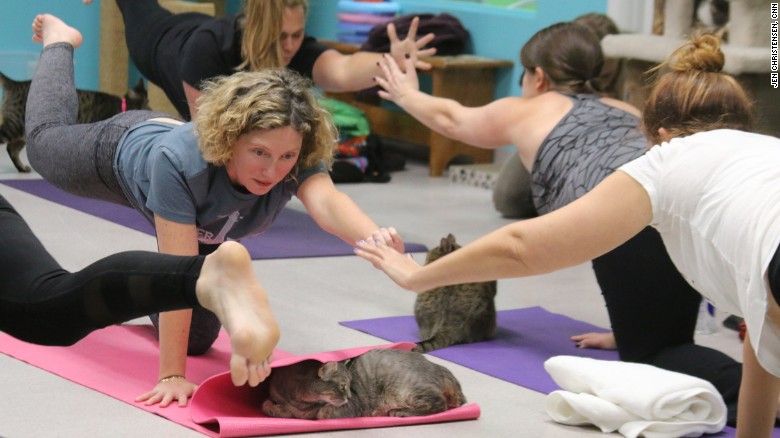 Cats love yoga mats and can’t help but be the center of the action at Good Mews shelter.
If you’ve ever tried a hero’s pose with your cat around, you know the challenge has nothing to do with your breathing or flexibility.
The Herculean task is keeping your yoga mat feline-free. Whatever they make yoga mats out of, the material must come from the catnip family. Turn your back just once to grab your water bottle, and you’ll instantly hear the pop, pop, pop of their claws on your pristine $70 Lululemon.
On this night, however, a group of about 15 Spandex-clad women have deliberately plunked down their mats in the middle of the cat room. And true to form, the sleeping cats that had been lounging — furry legs dangling from cat trees around the room — instantly jolt awake. They start climbing down toward their prey. 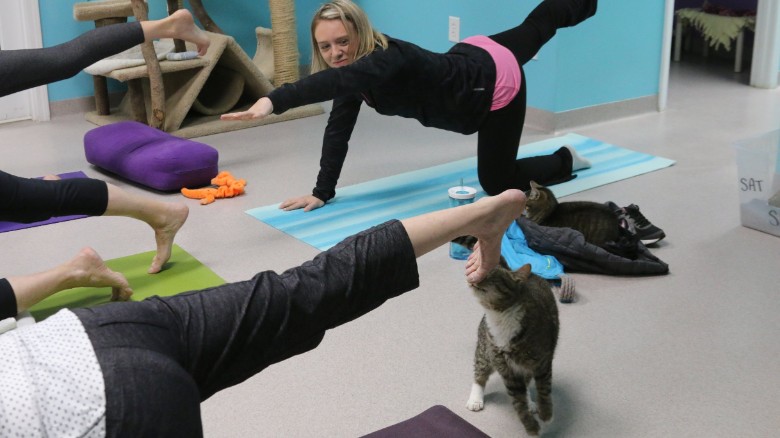 The cats enjoyed this balance pose at the Marietta, Georgia, shelter.
One of the shelter managers, along with a longtime volunteer who is a certified yoga instructor, got the idea for the class — where else — after seeing a cat video on the Internet. Only, in that case, people brought cats to a yoga studio.
“I thought with people with allergies, it might be hard to clean up the studio afterward, so I thought, why not bring the class to the shelter?” said the instructor, Lisa Bass.
The manager of the shelter, Lisa Johns, thought it was a great idea. She’d wanted another way to get people into the shelter to see the adoptable animals.
With Bass donating her time, the class participation fee becomes a donation to help support the animals. Besides the usual assortment of cats and kittens, the shelter runs an expensive program that places cats with special medical needs, continuing to pay for their care even after they’ve left the shelter. 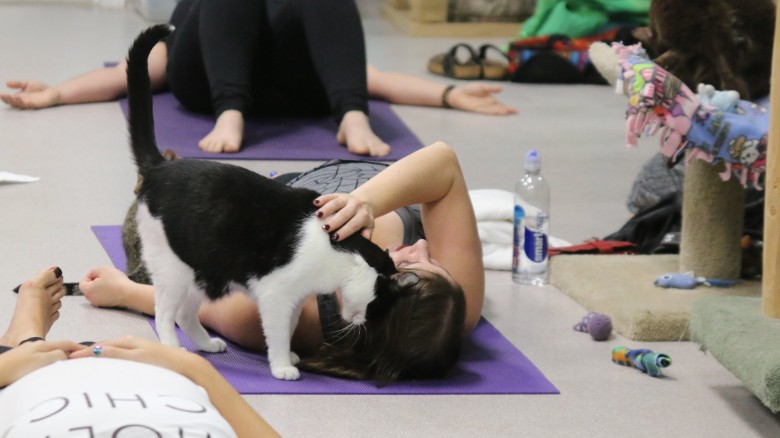 Cats may be distracting during yoga, but the love they give is welcome.
The class has been a huge hit. It sells out almost as soon as the times are announced online three times a month.
“I really like the class and really like hanging out with all the cats,” said Katie Misencik, a volunteer and regular yoga practitioner.
Misencik has taken other theme yoga classes, including one that involves beer, but she says the cat class is pretty special.
“It’s all about fun and is a little more relaxing,” she said. “There’s not as much pressure to make my form perfect.”
Studies show that yoga can improve your balance, your breathing, your sense of self and your overall health. It can reduce anxiety and fight off depression. It strengthens your core and can help ease chronic pain. 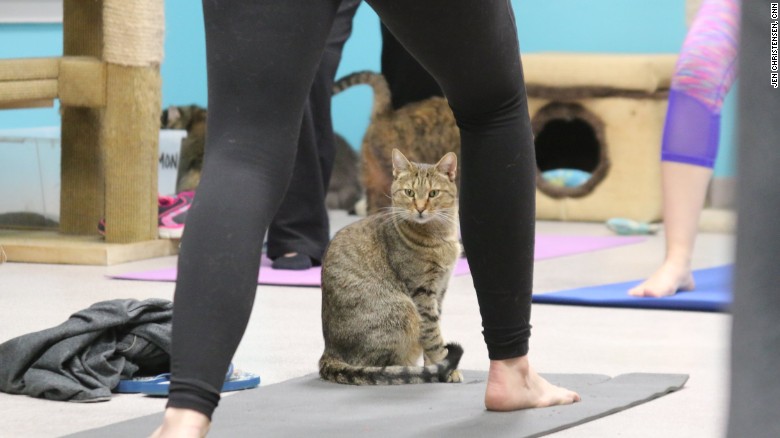 A cat peers between the legs of one yoga student.
There are no studies about the health benefits of cat yoga, but Bass does see a difference in her students after they’ve shared their practice with a tiger cat.
“In general, yoga is great for lowering the heart rate, and it’s great for flexibility,” Bass said. “Cat yoga is good for your soul.”
From the happy looks on the women’s faces, the class does seem to be a hit — even if, collectively, they may suffer a little from what Bass calls CADD, or cat attention deficit disorder. But even the most senior of yogis might struggle in a room with such present creatures. 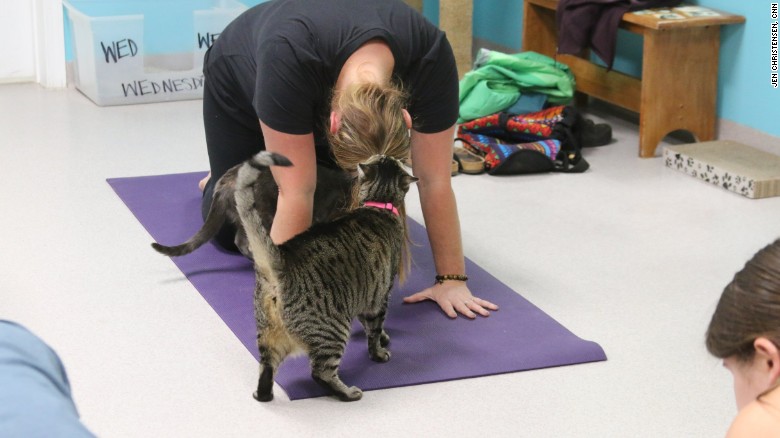 A cat checks a participant’s form — and her ponytail.
As soon as the soothing music starts, cats do make a beeline for the students and the yoga mats.
A calico wanders through a woman’s legs as she tries to balance in a low lunge. A white cat sniffs and rubs against a woman in cow pose as she instantly becomes a kind of cat jungle gym. One nestles into the discarded jacket next to a woman’s mat.
Two tabbies gang up and attack a woman’s long dangling ponytail as she attempts downward dog, or “downward cat,” as the instructor calls it. A tuxedo perched high in a cat tree looks down at another woman, a little judgy at her attempt at a cat pose. 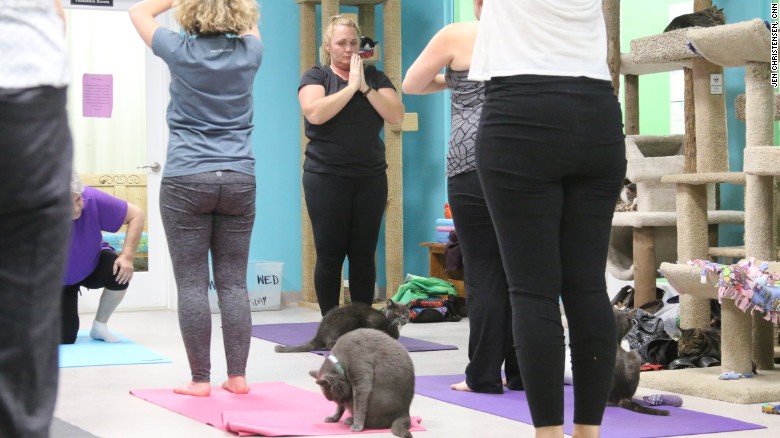 Namaste! Cats seem to love yoga.
To a person, each woman laughs at these antics. Some even dangle fuzzy toys as they make their complicated moves. The cats seem to like the attention.
“They get stimulation from the humans,” said Johns, the manager. “They are very curious about what is going on. They get a lot of loving and affection and get more socialization.”
Johns also thinks the humans benefit from the special kind of happiness you can only feel bonding with a cat.
“You’re not just doing something healthy for yourself,” Johns said. “You are doing a bit of good too for these shelter cats that will only get even more adoptable with the extra time and attention.”

It's Wednesday. Take time and have a mid-week Yin

Get ready for the week ahead! 😀

This weekend take some time in YOUR space !

In stressful times, the best thing for you to do i

Choosing a mat for your needs is sometimes quite a

It's all about extending for this week's #yogamenm

Summer is slowly on it's way ! Start getting ready

This winter treat yourself to a new Yoga experienc

The Manduka GRP yoga mat. Get the heat! The GRP i

This is your r

Welcome to our Yogiverse – Roslyn Pillay
Roslyn is

Original post : @my_spaceyoga
This is to all the m